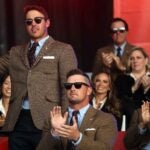 Check in every week for the unfiltered opinions of our writers and editors as they break down the hottest topics in the sport, and join the conversation by tweeting us @golf_com. This week, we discuss Bryson vs. Brooks, a shakeup on the LPGA Tour, Tiger Woods and more.

1. The latest chapter in the Bryson–Brooks saga was written this week, as the rivals will try to settle their long-running feud on the day after Thanksgiving in the fifth version of the Match. Perhaps fittingly, the event will be played in Vegas, the Entertainment Capital of the World, over 12 holes at Wynn Golf Club. What’s the best-case scenario for how this event plays out?

Josh Sens, senior writer (@joshsens): Brooks out-drives him on every hole, but Bryson trounces him in the match, giving them both reason to be irked.

Dylan Dethier, senior writer (@dylan_dethier): They each decide to take the match itself very seriously, try earnestly to beat the hell out of each other, and at one point, one of ’em snaps at the other and it leads to a lengthy conversation about how this whole thing makes ’em all FEEL. And then Phil and Barkley come in for post-convo analysis.

Tim Reilly, Director of Social (@LifeofTimReilly): The best-case scenario is some real-life drama breaks out. A lot of this “feud” has felt far too manufactured these past few weeks. We need an authentic war of words to break out to keep this interesting. Outside of that, I’m hoping there is an awakening from course designers and owners who tune in to create more 12-hole courses. That’s the perfect length to satisfy the needs of hardcore golfers and keep those new to the game interested.

2. The shorter length of this Match will separate it from previous iterations. How else would you like to see event organizers shake up the Bryson v. Brooks showdown?

Dethier: Let’s first acknowledge that the 12-hole thing is (at the very least!) a smart thing to test out. Previous editions of the Match have … kinda dragged. But I think Josh is on the right track. Throw a bench press on the 8th tee and see what happens?

Reilly: Let Bryson and Brooks choose who caddies for the other guy. I saw this brought up by a commenter on Instagram, and I love it.

Colgan: Love the above ideas, particularly the bench-off. Also, give us a Manningcast-style broadcast with Tiger Woods. Four hours inside his brain would be nothing if not illuminating.

3. One of the LPGA’s majors received a sizable shakeup this week, as the tournament now known as the ANA Inspiration will move from Mission Hills Country Club in California to Houston in 2023 and to a later date in the spring (potentially avoiding a conflict with the Augusta National Women’s Amateur); it also will be renamed the Chevron Championship and receive a 60 percent purse increase. While the payouts and exposure are no doubt positives, the move will at least be somewhat bittersweet, as the event has been held at Mission Hills since its inception in 1972, with the winners diving into Poppy’s Pond since 1988. Good move overall?

Sens: Bad move for anyone inclined toward nostalgia or deeply wedded to tradition. But I doubt you’re going to hear any players complaining. I hope they find a way to keep the ceremonial winner’s plunge into a pond.

Dethier: TBD. If the Chevron is fully committed to creating an event with the atmosphere and depth of the setup at Mission Hills, absolutely. Avoiding the ANWA is smart, locking down an enthusiastic sponsor is crucial, and a pay increase is a big, big deal. Let’s hope the golf course can properly showcase the elite field, and let’s hope it’s here to stay.

Reilly: Dylan summed it up well. While it’s always a bummer to lose out on a historical connection to an event, it’s too soon to say if this will turn into a better play for the long term. The LPGA has forward thinkers running the show, and that’s what they’re trying to do. At the very least, moving the timing around is a wise decision.

Colgan: Tradition is great! Money and exposure are greater for the women’s game. The big questions surround Chevron’s involvement, for sure, but the number of zeroes attached to their financial commitment would seem to be a fairly good sign they’re into it.

4. Harris English revealed on the Fore the People podcast that the grip on his putter, which he had been using since college and had begun to “flap” over, needed to be examined by a rules official before his Sunday singles match at the Ryder Cup after apparently someone had called in the potential rules infraction; the grip was deemed non-conforming until Davis Love III saved the day by performing surgery on it. Said English: “I’ve been putting with it for eight, nine, 10 years, I have no idea how long. Somehow, someone thought it made me putt better. I don’t know. I have no idea why.” Rules are rules, but is having to modify/replace an old grip a sensible one?

Sens: If it gives you an advantage, absolutely. That said, I’m having a hard time imagining how English’s grip gave him any kind of edge, or how any putter grip would do that, unless it somehow allowed you to secretly anchor.

Dethier: I’d take it one step further: Let’s invalidate all his results from the past couple seasons! Kick him off the Tour!

Nah, just kidding. This one doesn’t pass the common-sense test, and English certainly wasn’t doing anything sketchy. I don’t get it. I also don’t get what would compel someone watching to complain about it. But in the end, he handled it well, Davis Love III got to show off his knife skills, and we’re no worse off.

Reilly: The only thing I could think of is a European fan pointing this out in hopes of causing a mental strain on English’s game.

Colgan: When I saw this story, I couldn’t help but think about the story of Will Zalatoris’ putter insert, which caved after years of use, likely hurting Zalatoris’ putting for months. Is it possible English’s grip change actually helped? Maybe not, but sometimes it’s a good idea to make a change long before something becomes an issue.

5. This week marked the 25th anniversary of Tiger Woods’ first of 82 PGA Tour wins, at the Las Vegas Invitational. Many of Woods’ wins are burned in our memory banks — 1997 Masters, 2000 U.S. Open, 2019 Masters, et al. — but which of Woods’ more under-the-radar victories do think deserves more attention?

Sens: For some reason, his win at Cog Hill in ’97 comes to mind. Toward the end of his first full year on Tour. I’m pretty sure it was this fourth win of the season. They let the ropes down on 18, and a swarm of spectators rushed up behind Tiger as he played the final hole. An early sign of the coming madness.

Dethier: His most recent W at the Zozo Championship still doesn’t get enough love. The 2018 Tour Championship was his official return. The 2019 Masters was the completion of his comeback and the crowning achievement of this miraculous new chapter. But the 2019 Zozo was validation that that Masters win wasn’t a fluke — this cat could still play.

Reilly: Being the Long Island homer I am, I have to go with Tiger’s ‘02 U.S. Open win at Bethpage Black. I grew up 15 minutes away from Bethpage, and when the U.S. Open was announced, it consumed the area with excitement. The excitement was about getting to watch the world’s best struggle on our pride and joy. Bethpage is the epitome of New York tough, if you will. It lived up to the hype as 155 golfers finished above par for the championship. The only player who finished under par? Tiger. It was an equal testament to the greatness of Tiger and Bethpage.

Colgan: A win that deserves more attention from me: his victory at the 2009 Memorial. That weekend, I witnessed my brother win a dollar off my grandpa off their biannual “Tiger Woods vs. the field” bet. Andrew took Tiger and watched as he stunned the field with that famous chip-in on the 11th, and then birdied 17 and 18 to close out the win.

6. This week, we released the results of a survey that asked 2,817 golfers questions on their golf-spending habits. Among the questions asked were how much players spend on apparel, equipment, greens fees and golf travel. What part of the game are you most likely to splurge on? Travel, gear, game improvement, something else?

Sens: Travel, and it’s not even close.

Dethier: Ditto. Golf is best when it’s about adventure. So take me to a special field, and I’ll be a happy golfer.

Reilly: Travel is the only answer. I’m in the midst of deciding where I want to splurge on a golf trip this winter. Any suggestions?!

Colgan: Travel! (And yes, my recent Pinehurst escapade is still fresh on my mind.)