Asheville is a major tourist spot. According to Explore Asheville, the county that is home to the city had 11.1 million visitors to the area with an economic impact of $3 billion.

There are many ways to see this beautiful town: on foot, on bicycle or with a traditional trolley tour that stops at the major stops. All of those are fine and memorable ways to visit Asheville.

But then, there is LaZoom Tours.

This whacky, unpredictable tour is the brainchild of Jen and Jim Lauzon, who decided to bring a touch of New Orleans to North Carolina. Jen said they were street performers and decided to expand their reach in the area with some comedy.

“When my husband, Jim, and I met, we started performing together, and he was a creator of big costumes, and we both love comedy and actually came up with the idea in New Orleans,” Jen said. “We had our daughter and were drawn to the mountains here in Asheville, and so we moved here. We bounced the idea off of locals, and they said it wasn’t too weird for Asheville, which I was surprised to hear.”

LaZoom is certainly the weirdest way to see Asheville. The company operates four tours out of three brightly-colored busses, and the tour guides range from an angry nun to a medium to an energetic bee. Yes, you’ll learn a lot about Asheville, but you’ll also laugh at the skits interwoven within the tour.

On my tour, Chicago Second City performing troupe veteran Jillian Burfete was our guide, and she portrayed bad psychic “Sayonce.”

She sees dual success in sharing the city’s history and back-and-forth comedy with the customers.

“Asheville is such a cool town, such a historic town. There’s so many buildings there. We have a big history of being in debt after the Great Depression, and that’s really affected our town for a long time,” Jen said. “You can’t recreate the dynamics that happen on the bus. It’s a moving bus that you’re watching sort of a show on while also getting a history information, so there’s a lot of things going on, which does make it very unusual.”

You are probably going to see anything on this tour, from a nun screaming at you while riding on a bike near your bus to an energetic bee excited about the pollination opportunities in North Carolina.

This is a PG-13 kind of tour, and chances are you will be made fun of by the guide. Chances are also high you will have a fun time.

Jen wants to make sure the tours change as new people ride the buses.

“One thing we love doing is just growing our cast of characters. We’ve got a full house right now but we have room for even more, and we love when these special people come to find us like this. Even during COVID, we hired a couple of performers that were just have great backgrounds, so talented. So, we’ll just keep growing because tours are selling out and so we could do a lot more each day you know here so that’s sort of where our sights are set. Now we have four different experiences, the kids tour, Asheville, ghosted, and then our fender bender was is a live music brewery tour.”

Jen and Jim are still conducting tours this month and operate through most of the year. If you visit Asheville, you may, one day, forget the restaurant you dined in, the shop you walked into, but you will never forget LaZoom Tours.

Walking down the hall in the popular downtown mall known as the Grove Arcade, my nose was immediately alerted that something good-smelling was a few doors down, and I found it.

When COVID-19 hit, their business model had to shift as many spas shut down during the pandemic. As a response, founder and CEO Laura McCann opened a small store to try and recoup some business in a socially-distanced, masked space — and it was a success and gave McCann a chance to personally connect with clients face-to-face.

“It’s a very popular industry, billions [of stores]. The idea around aromatherapy is with the right two or three oils, you can actually ignite the properties of the oils, which could be an algesic, anti-inflammatory … there’s all kinds of different ones,” McCann said. “When they’re blended like this, it’s not as important to say, ‘What do they do?’ What we want to know is, ‘Do you like the way it smells? Will you use it? Will you take the deep breath and will you ask yourself to have the intention for the healing that you’re looking for?'”

My wife has used essential oils for years, but I learned a big lesson from McCann: These oils work great on skin, but not so much as a diffuser — which she preaches to her clients.

“We want them here and then the breath, the big breath. [There’s] nothing wrong with the room smelling great — it’s relaxing, and that’s always good for us. But what we need is always inhalation and skin absorption. That’s the key, which is why you always want an oil that’s diluted in a carrier,” McCann said. “If you put a real oil on, it’s almost like medicine, and you would have nothing to protect you, so we don’t want to eat them. We don’t want to put [something such as a] lemon right on the skin. We want to always have like an oil or something as a carrier.”

McCann’s business is doing well both with the store, over the web and in spas and other stores. She made the move from New York City to Asheville a few years back, and like everyone we spoke to, loves living here and running a business in this western North Carolina city.

“It’s got everything a big city has, but you can get everywhere in 15 minutes. It’s a small community that feels like a city,” McCann said. “As a startup entrepreneur, there’s an ecosystem, and it’s small enough that if you’re involved in it, you are mattering, and you’re not competing with everybody and anybody.”

McCann is able to add to her praise that Asheville is now a place where you can put a little bit of peace on your wrist and inhale in the beauty.

For centuries, the Blue Ridge Mountains have hosted an unusual but beautiful weather phenomenon: the breathtaking thermal inversion in the valleys of the mountains.

Photographer Steve Rhodes, producer Megan Simpson and I took a pre-dawn trip almost 5,000 feet in elevation to capture this beautiful site. Several other people parked at our overlook too, to capture the inversion on their cameras.

Thermal inversions create fog, and it’s not uncommon to see this type of weather in Indiana, but it is a totally different situation near Asheville, North Carolina.

Here’s what happens: In the morning as the sun rises, warm air rises and mixes with the cold air aloft. As the clouds form and slowly rise, they hug the sides of the peaks, and it creates a bizarre and wonderful look as the clouds appear to move like an ocean.

Visitors to the Blue Ridge Parkway can see this anytime of the year, but the best time to see this more dramatically is during the autumn season. The cloud movement looks like a river moving in and out of the mountain valleys. The higher you go, the better it looks — especially at 5,000 feet or above. 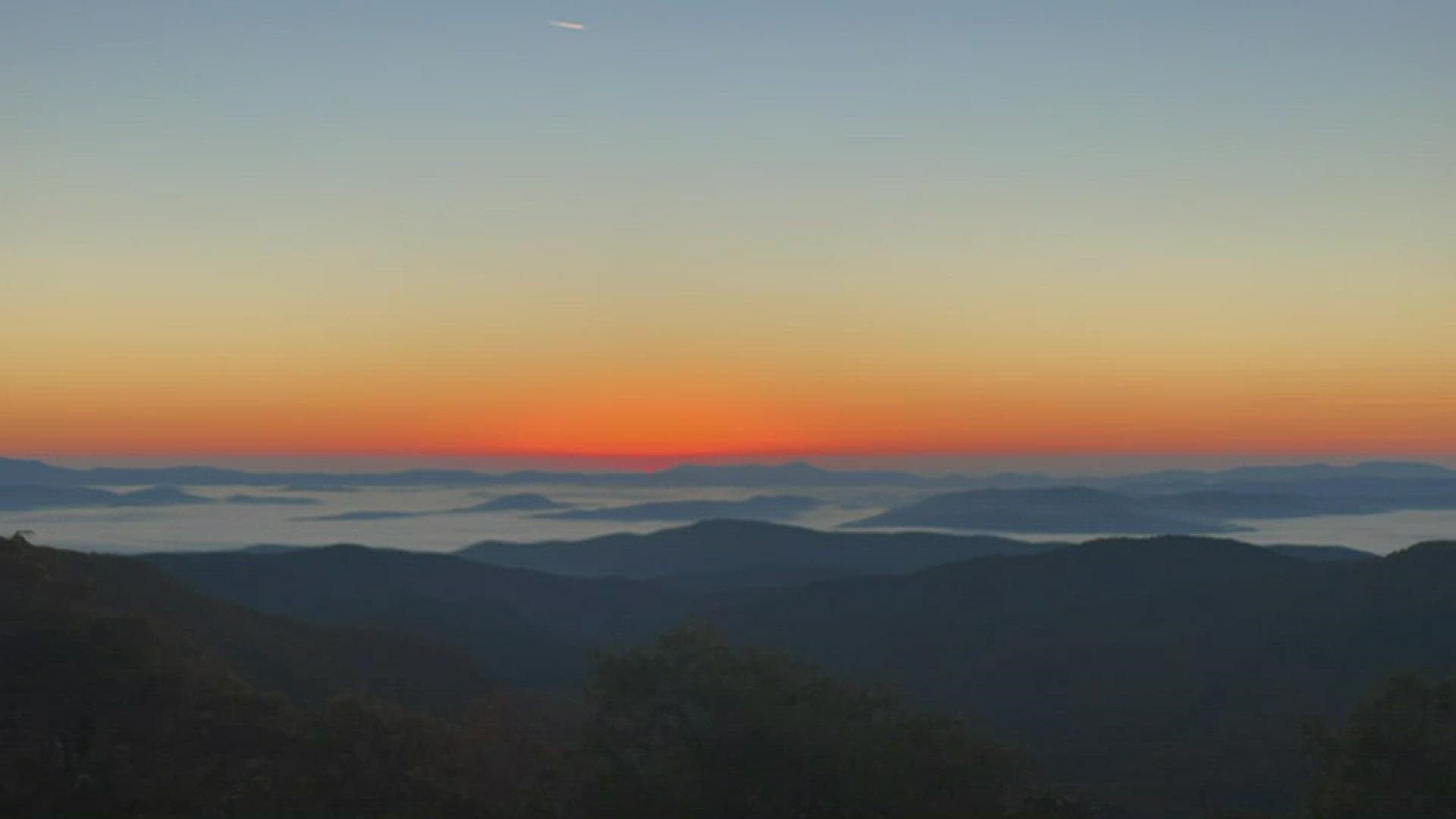 If you are going, check out these vantage points as chosen by the mountain experts at Explore Asheville:·

Be sure to check out the thermal inversion. It just may be the highlight of your Blue Ridge Parkway trip!