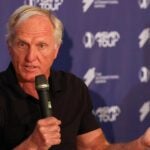 Greg Norman speaks with the media at the Saudi International event earlier this month.

Last week, while many of the best golfers in the world spoke out in favor of the PGA Tour and against a Saudi-backed breakaway tour, a response was brewing on the other side of the country. Greg Norman, the CEO of LIV Golf, was busy crafting a memo to send to various players and agents. Its title was direct: PGA Tour Cannot Ban Players Who Join LIV Golf.

That idea has been floated repeatedly by Jay Monahan, commissioner of the PGA Tour, and much has been made of the potential legality of such a ban. As the perceived head of the breakaway tour, Norman was getting his points in line. The memo, which Norman’s team says was shared with players on Friday of the Genesis, included seven points and 25 bullets.

Buried within were implications that the Tour would violate antitrust laws, its own non-profit status, its own bylaws and more. In the note the memo was attached to, Norman continued to state LIV Golf’s goal of co-existence with the PGA Tour but added that it would not accept “these egregious acts of bullying” via ban discussions.

“We encourage you to request the PGA Tour provide you with these threats in writing and written opinions of its outside counsel that these bans are legal and enforceable,” Norman wrote. “It would not surprise us if the Tour is unwilling to do so.”

Dating back to early 2020, Monahan has repeatedly suggested that players who intend to play both the PGA Tour and any breakaway tour would hereby be banned from the former. At first, that was inclusive of both the Saudi-backed tour and the separate Premier Golf League. But lately, the attention has turned almost entirely to the Saudi-backed alternative and Norman’s LIV Golf enterprise that is rumored to make it a reality in the coming months.

On Tuesday afternoon at the Honda Classic, during a mandatory players meeting, Monahan reiterated the same stance. According to one source in the room, the discussion was intense, and one player was even seen recording audio of the meeting. Golf Channel reported Monahan told players, “walk out that door now” if they intended to entertain breakaway tours. Monahan continued to stand firm during a Wednesday phone interview with Doug Ferguson of The Associated Press, saying, “I told the players we’re moving on and anyone on the fence needs to make a decision.”

Many players made their verbal decisions clear last week at the Genesis Invitational, where the idea of a breakaway tour hung over the event like a cloud. Each of the top 10 players in the world was on hand, with the likes of Rory McIlroy, Collin Morikawa, Jon Rahm and others clarifying their allegiance is with the PGA Tour.

Mickelson’s comments reached Tour players just in time for Justin Thomas to call them ‘egotistical’ and for McIlroy to label them “naive, selfish, egotistical, ignorant.” But at the root of Mickelson’s demise was an intention, as he said, is a “once-in-a-lifetime opportunity to reshape how the PGA Tour operates.”

But that was hardly the only thing they were asked to comment on. The extent to which Phil Mickelson, the reigning PGA Champion, was/is considering a breakaway tour was detailed with damning comments published in an excerpt of a forthcoming biography. Mickelson called the PGA Tour a ‘dictatorship,’ not a democracy, and was radio silent in the days that followed. But then Tuesday afternoon he sent out an apology statement for those comments and others, calling them ‘reckless’ and promising to ‘take some time away.’

“Golf desperately needs change, and real change is always preceded by disruption,” Mickelson said. “I have always known that criticism would come with exploring anything new.”

Disruption through competition is what Norman’s team believes the PGA Tour is repressing. “We will not permit the Tour — as the long-standing monopolist over professional golf — to stifle free and fair competition to the detriment of professional golfers and the game itself,” Norman’s note continued. “For the good of your clients and the great game of golf, we hope you will not as well. Your players should not be encumbered by these outrageous threats.”