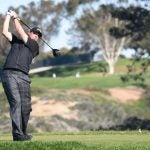 Phil Mickelson hits his tee shot on the 5th hole at Torrey Pines during the 2017 Farmers Insurance Open.

Check in every week for the unfiltered opinions of our writers and editors as they break down the hottest topics in the sport, and join the conversation by tweeting us @golf_com. This week, we discuss Phil Mickelson’s chances at this week’s U.S. Open at Torrey Pines, under-the-radar picks, new golf leagues, 10-stroke penalties and more.

1. U.S. Open week is here. The year’s third major tees off Thursday at Torrey Pines in San Diego, and maybe no storyline is bigger than the winner of the last major. Phil Mickelson, who won the PGA Championship at the age of 50, returns to his hometown in search of the one major that has escaped him. On a conference call to preview NBC’s coverage of the tournament, Mickelson’s former caddie, Jim “Bones” Mackay said: “It wouldn’t surprise me one bit if he got right in the mix.” How would you handicap Phil’s chances at Torrey?

Josh Sens, senior writer (@JoshSens): As Zak said, slim to none, and Slim just dropped a couple of shots trying to chop out of deep kikuyu rough. I’d love to be wrong on this one but would be willing to place money that I’m not.

Nick Piastowski, senior editor (@nickpia): I’m a bit more optimistic than Sean and Josh — but still pretty pessimistic. No one gave Phil a shot at Kiawah, either, and there he was hoisting the Wanamaker on Sunday. Maybe there really is something to his new focus techniques. But Torrey has tripped up Lefty over his past nine events there, and a U.S. Open isn’t exactly going to play any easier.

Alan Bastable, executive editor (@alan_bastable): Whenever there are expectations around Phil, he tends to underperform. The reverse is also true. This is why he will likely miss the cut at Torrey — and then win another Masters when he’s 60.

Michael Bamberger, senior writer:I think Bones had it exactly right: It wouldn’t surprise me to see him in the mix. To see him win would be way beyond amazing and unlikely — but not, of course, impossible.

2. Few observers, if any, predicted Mickelson’s victory at the PGA a month ago. Mickelson was 50 — and Julius Boros, at 48, had previously been the oldest player to win a major. Mickelson also hadn’t had a top 10 since last August, or a win since February of 2019. Still, maybe we shouldn’t have been surprised — he’s now won six majors, and over 50 times worldwide. With that in mind, is there another player who’s flying under the radar this week who maybe shouldn’t be?

Zak: The other San Diego boy. Xander Schauffele! He’s never really played well at Torrey Pines, but he has dominated (without a win) at the U.S. Open his entire career. When he finishes in the top five again, all I’ll say is you were warned!

Sens: Going a bit farther under the radar here with Branden Grace, who is back in form after a few off seasons and whose style of play is suited to find-the-fairway and grind-it-out requirements of a U.S. Open.

Piastowski: Adam Scott seems to fit this profile. At the 2008 U.S. Open at Torrey, where he played the first two rounds in the 1-2-3-in-the-world grouping, he tied for 26th. He tied for 10th at the Farmers Insurance Open earlier this year at Torrey. And like Phil, he’s a bit older, but the talent remains.

Bastable: If Zak is allowed to take the world No. 6 as an “under-the-radar” threat, I’m going with the world No. 12: Mr. Webb Simpson, mostly because I pick him in virtually every major pool. No matter how’s he playing, dude has a knack for showing up at the majors, especially the U.S. Open, where he has finished T16 or better in the past three. Book him for another strong week at Torrey.

Bamberger: Branden Grace is always under the radar, and I‘m right there with you, Sean.

3. Torrey Pines, the 2008 U.S. Open site and No. 5 on our recently released list of the best municipal golf courses in America, will have another four days in the national spotlight. Thirteen years ago, only Tiger Woods and Rocco Mediate got around 72 holes under par — and by one, at that — before Woods won in a Monday playoff. How do you see the world’s best tackling Torrey this time around?

Sens: Bombing, for sure. Though I wonder how many will be able to gouge as successfully as Bryson did at Winged Foot. He’s a different animal, and Winged Foot is a different course, where Bryson played strategically to angles that allowed him to run the ball up and use the flanges on certain greens to his advantage. I don’t think Torrey will allow for that as much. On the other hand, Torrey’s greens are far less intimidating. So all the more reason to tee it high and let it fly, especially on Torrey’s (relatively) gettable par-5s.

Piastowski: I agree with Sean and Josh. The USGA said they wouldn’t take steps to Bryson-proof the course so it’ll be bombs away. But I think your winner may play somewhat more like Patrick Reed did back in January, who was excellent after the tee, too.

Bastable: A bombers’ paradise perhaps, but the champion at week’s end will be the player who best manages the “bumpy” (by Tour standards) poa greens.

Bamberger: Irons and fairway woods off the tee, and mid-iron approach shots into these wicked greens, always below the hole. And for God’s sake — stay out of the rough. A jest: 1989 is calling, wondering what has happened to the U.S. Open. As others have noted, all of golf is pretty much a three-club test now.

Zak: Spieth 100 times over. Mentally, he bounces back better than anyone. Rory seems to be the opposite of that.

Sens: I’ve given up trying to predict what Rory will do. But we can pretty much count on Spieth grinding his way to a score somehow. I’m with Zak.

Piastowski: Spieth. Rory himself doesn’t sound like a confident player. Of course, this is when he’ll go out and win by 10.

5. The Premier Golf League resurfaced this week when its Twitter account tweeted out “an open letter to the world of golf.” The PGL would feature an 18-event schedule, with many of the events featuring 12 teams of four top-level pros, in addition to a 13th team chosen by fans. The PGL also imagines fans being treated to “dream fields and match ups, the best versus the best each week, a compelling team dimension with added storylines and rivalries, no cut, 3 days, team play-offs, relegation and promotion, a 5-hour broadcast window, exceptional production and a range of viewing options to suit a range of fans, existing and new.” But maybe the biggest takeaway is that neither the PGL nor the other alternative golf league, the Super Golf League, appear to be going away anytime soon. For golf fans, do these leagues hold more upside or downside?

Sens: More choice. More competition. More opportunities for punters to satisfy their gambling jones. On those fronts, I agree with Zak. A triumph of late-stage capitalism. On the other hand, if big money and big names alone were enough to make compelling entertainment, then the Phil-Tiger match at Shadow Creek would have been riveting. It wasn’t. I can imagine some fans seeing these alternatives as more exhibition golf and greeting them with a collective ‘meh.’

Piastowski: Competition is good — but only if the Tour and the new leagues push themselves to being bigger and better. We’re seeing signs of that with the PGA Tour and European Tour working together, and the creation of the Player Impact Program. But if the world’s best players become divided among three potential leagues, pro golf might get spread thin. And the overall product would suffer.

Bastable: Way too early to know! Sure, loaded-field events sound like great fun, but if they’re being played in the Middle and Far East, that’ll mean early-morning or middle-of-the-night viewing for U.S.-based fans. I’m most interested to see how the PGA Tour’s threat to ban defectors will play out. The PGL says the Tour has no legal leg to stand on, but you can bet Monahan and Co. will fight like hell to get their way. Might be the best slugfest since Rory vs. Reed at Hazeltine!

Bamberger: That letter was beyond weird. Who wrote it? What’s the return address? That’s no way to show you’re serious. Competition is good, but in every boxing match, presidential campaign or most anything else, usually you can identify the competing parties. This doesn’t seem close to half-baked.

6. Mark Hensby, during the first round of this week’s Palmetto Championship, played a wrong ball for five holes and was forced to take a two-stroke penalty for each hole that he did — meaning that his 74 became an 84. While we tip our cap to Hensby’s honesty in reporting the violation, is this a rule that should be reconsidered?

Zak: No way! How did he not notice earlier? We have rarely seen such an egregious mistake go uncorrected. I’m sure Hensby felt silly after the fact, but it is what it is. Make sure it’s your own ball.

Sens: Not in tournament golf. No way.

Piastowski: Keep the rule. It opens up a Pandora’s Box if it were to change. It falls along the lines of playing a different style of baseball — some have higher seams and would help a pitcher. But, man, doesn’t it just all sound funny that Hensby was dinged 10 shots for possibly nothing more than a dot?

Bastable: The rules are the rules, and 10-shot penalties are yet one more reason why golf is the greatest game.

Bamberger: It has become way too easy to blame the rulebook every time a player breaks the rules. It’s not the rulebook. Every rule in it is there for a reason. The easiest fix for this rules issue is one that only a tiny number of us like: At the elite level, a governing body or tournament sponsor should hand out game balls. It works well in tennis, baseball, football, basketball, soccer, handball, jai alai, lacrosse, field hockey, ping pong and other sports.