As we celebrate 40 years at South Bank, we continue our series and focus on the two-stage design competition that was conducted for the new Queensland Art Gallery building. The Planning Brief submitted in March 1972 was a key document in the successful design and development of the Gallery, due to its clarity, vision and understanding of the context and requirements for a modern art gallery.

RELATED: Part 1: The proposals for a Cultural Centre for Queensland

The first stage was to invite ten firms on the register for Queensland Government work with the Works Department to participate in the competition. These firms were all well respected Brisbane-based architectural firms.28 The first stage closed in November 1972 and the names of the three firms proceeding to the second stage were announced in the following month. They were: Bligh Jessup Bretnall and Partners; Robin Gibson and Partners; and Lund, Hutton, Newell Paulsen.

The second stage closed on 1 March 1973 and the winner of the competition, Robin Gibson and Partners, announced on 16 April 1973.29 The assessors concluded that the ‘winning design exhibits great clarity and simplicity of concept and relates admirably to the environment and site’ (illustrated).30 Gibson later commented to the Steering Committee for the new Art Gallery that in ‘developing the design to final completion it was necessary to keep in mind the original basic design philosophy’ that had been articulated in the Planning Brief.31

The Art Gallery was initially located along Grey Street where the Museum is today, and between it and the river edge was parkland, the Gallery’s horizontal buildings stepped up as terraces from the river. Gibson began working on the detailed design for the Queensland Art Gallery but the program was delayed when the question of a Cultural Centre for Queensland re-surfaced as a definite project.

Re-emergence of a Queensland Cultural Centre

While the Queensland Art Gallery project had been the focus of the government’s attention for the chosen site at South Brisbane bounded by Melbourne and Grey Streets and the Brisbane River, the plans for a Cultural Centre were not entirely abandoned. In March 1971, the Minister for Education and Cultural Activities submitted a proposal to the Queensland Government Cabinet for the acquisition of two blocks at South Brisbane for the State Library of Queensland and Queensland Museum. This had the support of the Brisbane City Council, but the proposal was rejected.32 By early 1974 a range of issues for the need of a Cultural Centre at South Brisbane to accompany the Art Gallery was brought to the government’s attention.

DELVE DEEPER: The history of the Queensland Art Gallery

Just as much as the new Art Gallery building was a priority, it had become increasingly clear that a new Museum, Library and a state-of-the-art Performing Arts Centre was also needed. In 1973, the Board of Trustees of the Queensland Museum had commissioned a feasibility study on the re-development of the Queensland Museum as the conditions in the Exhibition Building were less than adequate.33 The Queensland Art Gallery been accommodated in the former Concert Hall in the Exhibition Building (Old Museum Building) on Gregory Terrace since 1930 before relocating to the the MIM (Mount Isa Mines) building in Ann Street, Brisbane City in 1975.

The Museum study investigated a range of sites and recommended a site within Albert Park, Upper Albert Street, Brisbane City.34 This study provided a compelling argument for a new Museum building. Similarly, the State Library, occupying a building in William Street, Brisbane City, erected in 1879 with extensions in 1959, was in urgent need of additional space. The Works Department commissioned Robin Gibson and Partners to undertake a feasibility study to demonstrate how the existing building in William Street could be extended.35

Although the Queensland State Government did not own or operate a major performing arts venue, the sale of Her Majesty’s Theatre in Queen Street, Brisbane City, in 1973 was cause for concern about the future of the performing arts in Brisbane. The building had been the main venue for opera, ballet and dramatic performances since 1888 and the new owners intended to demolish the building and re-develop the site.36

In February 1974, the Minister for Education and Cultural Activities, submitted to Cabinet a proposal for the acquisition of a site for a performing arts centre. Unlike the previous occasion when approval for land was sought for a new library and museum, on this occasion approval in principle was given to investigate the question.37 The suggested site was at South Brisbane adjacent to the new Art Gallery site on Melbourne Street. Two months later, the Premier of Queensland announced that ‘Brisbane may get an Arts Centre’… the Centre could incorporate the Queensland Art Gallery, the Queensland Museum, a concert hall and facilities for live theatre, ballet and other performing arts.38 Robin Gibson and Partners were engaged to assist in the development of a brief and prepare sketch plans and a physical scale model Cultural Centre at South Brisbane.

The proposal for a Cultural Centre was announced to the public on 14 November 1974. The complex would ‘comprise a museum equal to any in Australia; an outstanding art gallery; a performing arts centre; a new public library; and restaurant’.39 After the announcement, the Courier Mail declared that leading figures in the arts community were unanimous that this was an ‘imaginative and exciting project.’40 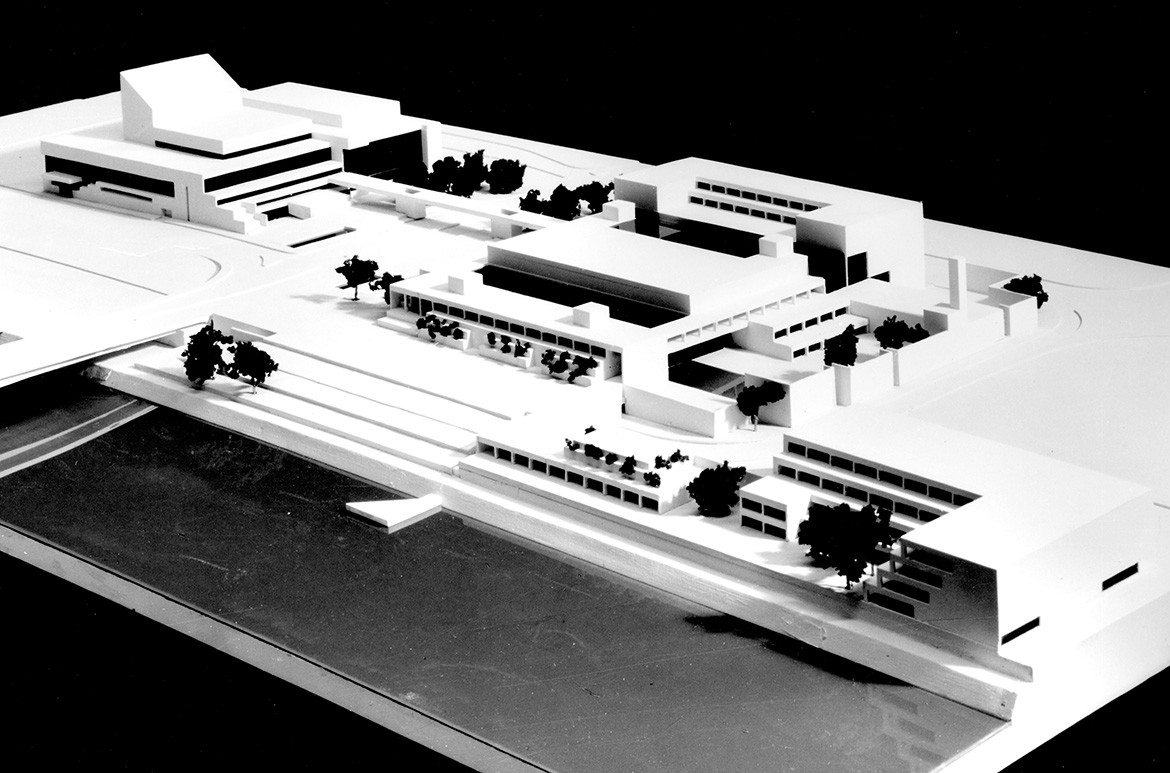 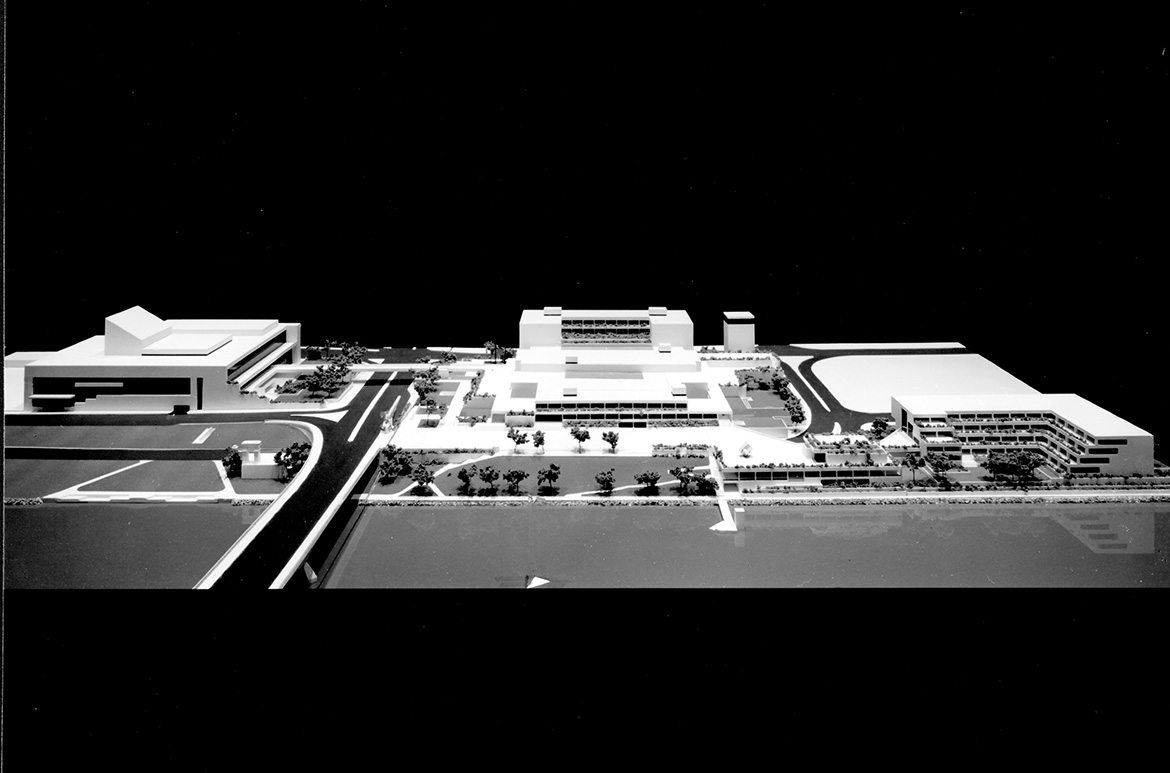 The initial plans and scale model of the proposed Queensland Cultural Centre differed in some key elements from what ultimately eventuated on the site. The general location of the four buildings was finally determined, however, the 1974 model (illustrated) was distinguished by triangular and trapezoidal building forms, unlike the later simpler rectangular expressions. The Art Gallery was diagonally aligned to face Melbourne Street and the river and stepped to a plaza, and an overhead walkway over Melbourne Street linked the two parts.

The proposal for a Cultural Centre at South Brisbane was presented to Cabinet on 18 November 1974.41 The submission outlined the current needs of the various cultural institutions and the advantages of an integrated and coordinated complex. Co-locating an art gallery, museum, library and performing arts centre would mean the sharing of car parking facilities, restaurants, mechanical services and some staff resources. In addition, the close proximity of the institutions had the ‘potential for much needed interaction’. The total cost for the Cultural Centre including land acquisition, car parking and site works was $45.4 million.42

Cabinet agreed to the project and the following immediate action:

The question remained — would this be the scheme that came to fruition? The Courier Mail editorialised that ‘Queenslanders understandably have become cynical after 79 years of promises’.43 But in this case they did.

This is an edited extract from the Queensland Cultural Centre Conservation Management Plan (published 2017), prepared by Conrad Gargett in association with Thom Blake, Historian and heritage consultant. Thom Blake researched and wrote the chapters on the history of the Cultural Centre and revised statement of significance. The individual building’s architecture, the site’s setting, landscape and fabric were investigated by Luke Pendergast with principal support by Robert Riddel. Alan Kirkwood and Peter Roy assisted with advice on the design approach and history of the planning and construction of the Cultural Centre.