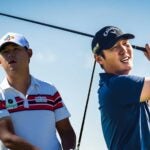 Danny Lee’s many practice rounds with Si Woo Kim helped push him back into a sponsorship with Callaway.

Such was the case for Danny Lee and Callaway. The new deal that the equipment company announced Wednesday afternoon might have never happened if it wasn’t for Si Woo Kim.

Lee became a Callaway staffer in 2009 after his U.S. Amateur win, but the relationship went on surprising hiatus at the beginning of 2019. He bounced around from TaylorMade to PXG over the last three years, but now he has ultimately completed his circuitous route back to Callaway.

“For my curiosity, I had to try [to see what else was out there],” Lee said Monday, adding he “decided to explore the world a little bit with the golf clubs. I’ve been with great companies, but now I’m back in with the greatest company I’ve ever worked with.”

It’s a deal that already has 12 Callaway clubs in Lee’s bag this week, and one he can attribute, at least in part, to Kim’s generosity, and Lee’s curiosity. The two often peg it together during mid-week practice rounds, and will even play during their off weeks together back in Dallas, where they both live. It was during one of those rounds in 2021 that Lee’s club curiosity took over.

“I like to hit other people’s clubs [when we’re practicing],” Lee said. “And I’ve tried Si Woo’s clubs many times. [I liked] the whole general bag. His irons looked really good and especially the driver. It’s a really good looking head.”

Shape, Lee says, is a crucial factor for his club selections. And there was just something about Kim’s driver and irons that stood out to him whenever he’d flirt with the idea in practice. Just a couple shots per practice round was all it took to create the “first trigger” in Lee’s mind that he wanted something that looked cleaner, or maybe faster at address. These Tour pros can be particular, but when they know what they like, they know what they want.

“The shape. For me, it’s all about the shape and how it looks,” Lee said. “It looked so clean and just looked like it was going to go straight.”

During this hectic time of the PGA Tour restarting season Tour pros will spend hours and hours over days and days trying to dial in new gear or “explore the world,” as Lee said, looking for something that makes sense with their game. But with the right amount of intrigue, it might not take all that. You might just find it right there next to you on the tee box.

As for Kim, “He was a little surprised [that I joined Team Callaway],” Lee said. “He thought it would never happen again.”

But now that it has, Kim deserves some thanks, right? Perhaps a finder’s fee? Lee cackled at the idea before offering up a solid compromise: